NOTE: Insight Control is not supported with Gen10 server blades.
A BladeSystem c7000 Enclosure holds up to 16 server blades and up to 8 compute, storage or workstation blades plus redundant network and storage interconnects. It includes a shared, multi-terabit high-speed midplane for wire-once connectivity of server blades to network and shared storage. Power is delivered through a pooled power backplane that ensures the full capacity of the redundant hot-plug power supplies is available to all system components.

Each c7000 enclosure is built with the following functions:

An BladeSystem Onboard Administrator management module is built in to the enclosure with the following functions: 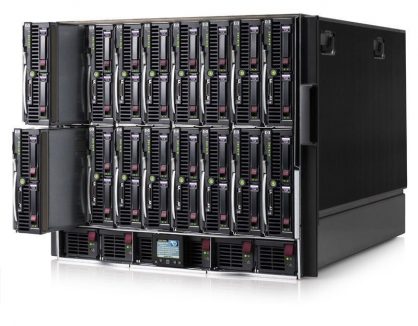